Artist Tim Rowan is the juror.

Images above from the 2014 Northeast Ceramic Sculpture Exhibition

In this solo installation, Lugo explores eclecticism and culture by juxtaposing street graffiti, European decorative patterning, and rich symbolism drawn from his Puerto Rican heritage. He creates a hybrid of visual art traditions and stimulates new conversations around cultural tolerance. The show features Lugo’s work created during his artist residency at Project Art in Cummington, Massachusetts.

Maya Zack’s installation invokes a Jewish family’s apartment in 1930s Berlin via computer-generated images viewed through 3D glasses. A sound component based on the artist’s interviews with the man who fled that home accompanies the piece.

In the installation Living Room, artist and filmmaker Maya Zack uses large-scale computer-generated 3D images accompanied by sound to evoke a Jewish family’s apartment from 1930s Berlin. While listening to the stories and memories of Manfred Nomburg, visitors can experience the apartment visually. 3D glasses enhance the oversized images reimagining rooms in the apartment and give them immediacy and depth. Zack interviewed Nomburg, a German-born Jew living in Israel who fled his Berlin home in 1938. He describes the apartment in loving detail: the layout, furniture, appliances, tableware, carpeting and paintings. Recollections of the familiar objects inspire Nomburg’s anecdotes about his family, bringing the rooms and their contents back to life. Like Zack’s film Mother Economy, exhibited at the Jewish Museum in 2008, Living Room explores the intersection of personal memory with historical events. Both pieces were inspired by a trip in which the artist travelled to Slovakia to the house where her grandmother grew up. She recalls her “encounter with the actual house, and the sense of emptiness and absence [she] felt while trying to imagine what had happened in between its walls — reconstructing a reality from a borrowed memory.” Biography Maya Zack was born in Israel in 1976. She lives and works in Tel Aviv. She has had solo exhibitions at the Alon Segev Gallery in Tel Aviv, the Natalie Seroussi Gallery in Paris, the Bezalel Gallery in Jerusalem, the CUC Gallery in Berlin, and others. Her work has been included in group shows in Berlin, Munich, Milan, New York, and other cities. Zack’s work is in many museum collections, including the Israel Museum in Jerusalem, the Jewish Museum in Berlin, and Beit Hatfutsot Museum in Tel Aviv. Zack’s films have been screened at festivals in Los Angeles, Vienna, Paris, Cologne, Budapest, Haifa, Tel Aviv and New York. In 2008, she was awarded Germany’s Celeste Art Prize for Mother Economy. Living Room was the winner of the Adi Prize for Jewish Expression in Art and Design in Jerusalem in 2010. Exhibition made possible by the Melva Bucksbaum Fund for Contemporary Art. Artist travel support provided by Artis. 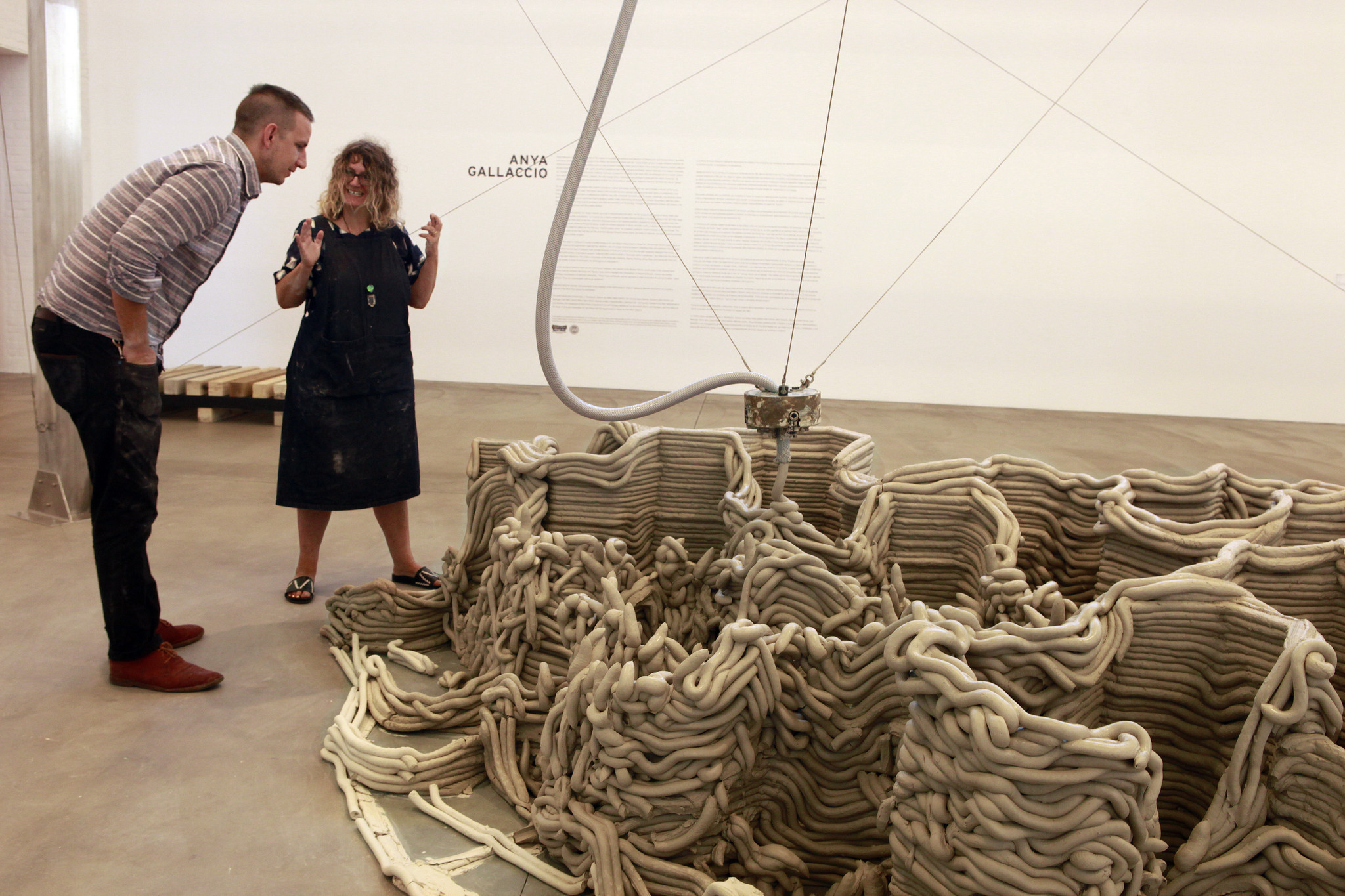 Anya Gallaccio sets ‘beautiful minds’ in motion with 3-D clay printing in San Diego Anya Gallaccio, local artist and professor from the University of California, San Diego, and Josh Miller, an assistant, discuss the clay formation from the Devil Tower creation July 23, 2015, at the Museum of Contemporary Art. (Giana Leone / San Diego Union-Tribune) By JAMES CHUTE Entertainment British artist Anya Gallaccio covered a gallery floor with roses in Brussels, suspended apples in Amsterdam, worked with ice in London and painted walls with chocolate in Vienna and Los Angeles. In the course of each exhibition, the installations radically changed as her materials inevitably deteriorated.

At the Museum of Contemporary Art San Diego downtown she’s sculpting with clay. She’s creating a likeness of Devils Tower, a Wyoming monument that movie buffs may recognize from the 1977 science-fiction movie “Close Encounters of the Third Kind.” “It doesn’t look like Devils Tower, does it?,” said a bemused Gallaccio, surveying her handiwork.

Great exhibition of new work by Anat Shiftan, as well as work by recent Alumni, MFA, and BFA students!

Left to right: works of James Mitschmyer and Kelly Stevenson

The NCECA 50th Anniversary Conference, Makers, Mentors and Milestones, will be held in Kansas City, MO at the Kansas City Convention Center, March 16-19, 2016.  In conjunction with the conference, the Leedy-Voulkos Art Center will host the 2016 NCECA National Student Juried Exhibition March 4 – April 30, 2016.  Awards will be juried after the work is installed.